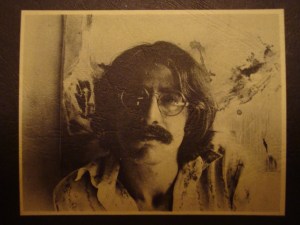 Many thanks to the remarkably helpful staff at Tulane Special Collections! They provided more clues that will allow me to once again pick up the search for Mallord.

Susanna Powers reminded me that Mallord published two books, a fact that I had filed away during my last search. Today my copy of Moving Against Quiet arrived in the mail. It was published eleven months after Love Alone Finds Cold. On the back cover there is a picture of Mallord (sans beard), which graces this post.

The content of the book is similar to Love Alone Finds Cold, a blend of psychedelic writings and Romantic posturing with echoes of the beat generation. It is worlds away from Toole’s literary forte of acerbic wit. But somehow these two writers connected, if only for a brief moment, just before Toole’s final journey.

Searching for a lost poet 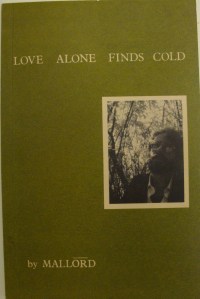 In the course of writing this biography I have found several trails leading to dead ends. But there is no dead end more intriguing to me than the connection between John Kennedy Toole and a poet who went by the name of Mallord.

His full name is Richard Mallord Silverman. He published a book of poems in New Orleans in 1969 titled Love Alone Finds Cold (Silver Bicycle Press). He gave Toole a copy and inscribed it January 20th, 1969–the day Toole fought with his mother and left New Orleans, never to return.

For years I have sought Mallord. In addition to the book of poems, I found two letters that he wrote to philosopher Bertrand Russell. From those letters it appears Mallord lived in Crestwood, NY in 1967 with a Laurie Gamola—or at least he was receiving mail through her. But here is where the trail ends: a book of poems, a New York address from the mid-sixties, his near obsession with the Romanitic poet Percy Bysshe Shelley as indicated in his letters, and a hitherto mysterious connection to American novelist John Kennedy Toole.

Perhaps Toole and Mallord were mere acquaintances, fellow students at Tulane, or perhaps they just shared a drink at a bar. Regardless, Mallord might offer insight into a time period in Toole’s life when he was shutting off from the world, succumbing to his consuming paranoia.

So I open up this question to you, dear readers, in hopes to find a way around this dead end. Does anyone have any information about the elusive poet named Mallord?